A 37-year-old female presented to the emergency room with severe, radiating bilateral flank pain lasting one week. Pain was constant and pressure-like. Patient had a past medical history significant for constipation, ovarian cysts, diverticulitis, and a colonic polypectomy. She denied fever, vomiting, and denied melena and hematochezia. Patient had no dysuria, frequency or hematuria. She denied vaginal discharge or odor. Patient was seen and treated by her primary care provider with ciprofloxacin and metronidazole for presumed diverticulitis. When pain failed to improve two days later, patient presented to the Emergency Department.

Upon arrival, her vital signs were as follows:

Her physical exam revealed left paraumbilical and left lower-quadrant tenderness. No masses were palpated. A bedside ultrasound of the abdomen is performed, and the following images were obtained. In examining these images, what do you notice and how would this change your patient management? 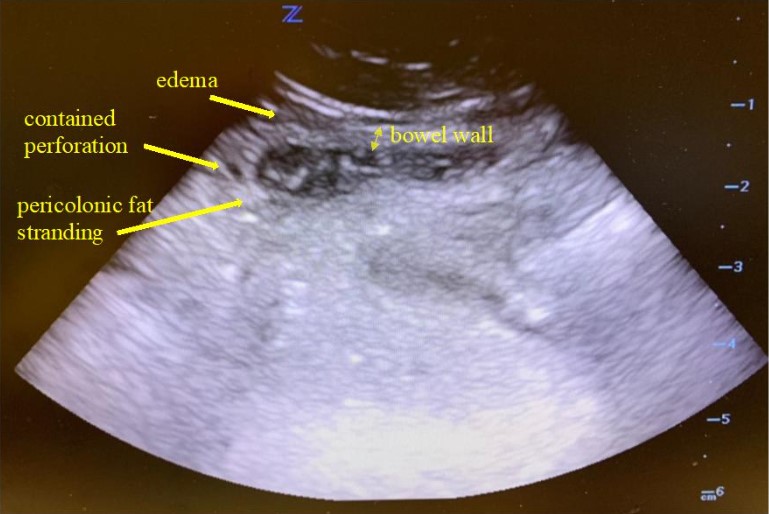 In these images/videos, a thickened bowel wall is observed in the distal descending colon and proximal sigmoid. Extensive pericolonic fat stranding is represented by the hyperechoic fat deep to the bowel, with no drainable abscess found.

In the emergency setting, computed tomography (CT) scans are highly accurate and remain the most widely used modality to diagnose diverticulitis, with an overall accuracy of 99% [1]. CT can assist in planning if surgical intervention is needed. An estimated 15-20% of all patients admitted with either complicated or uncomplicated diverticulitis will require surgical intervention during their initial admission, yet that likelihood increases to upwards of 50% for those with complicated diverticulitis [2]. However, concerns of radiation exposure and extended length of stays have led to increased use of point-of-care ultrasound (POCUS) [3].

There are 3 POCUS indicators of acute diverticulitis, namely:

To perform this technique, place the curvilinear probe on the patient in the areas of tenderness and compress the bowel wall. The bowel will be found just deep to the peritoneal line. In diverticulitis, the bowel will appear with a thickened wall >4 mm with a visible diverticulum.

Surrounding hypoechoic edema is often visible. Perforation may appear contiguously to the diverticulitis. Normal bowel will compress fully with the ultrasound probe. 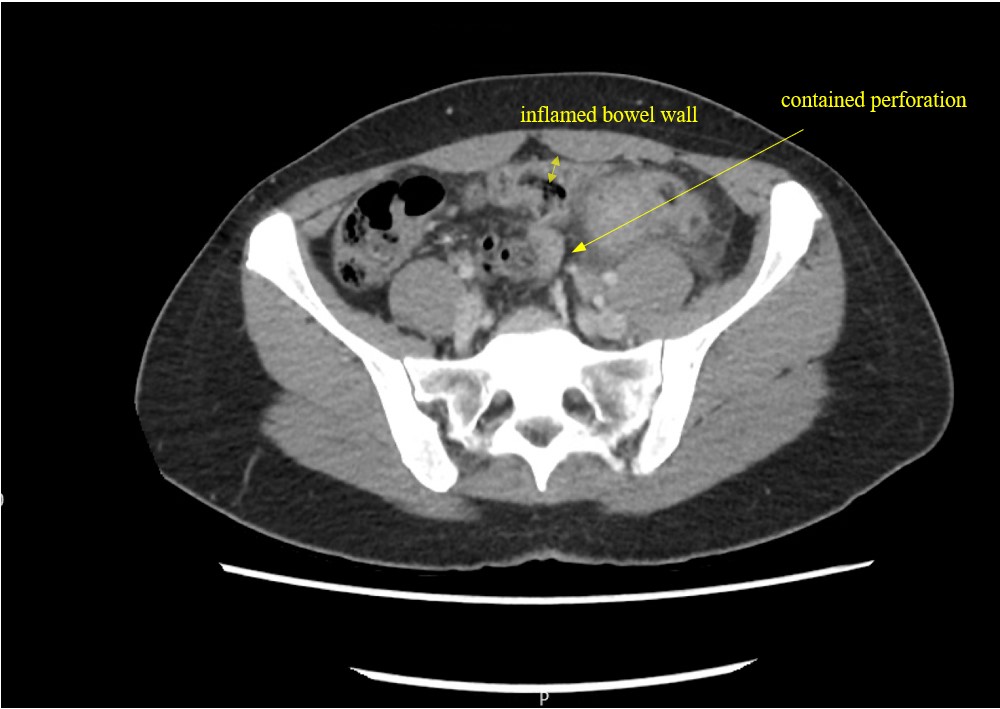 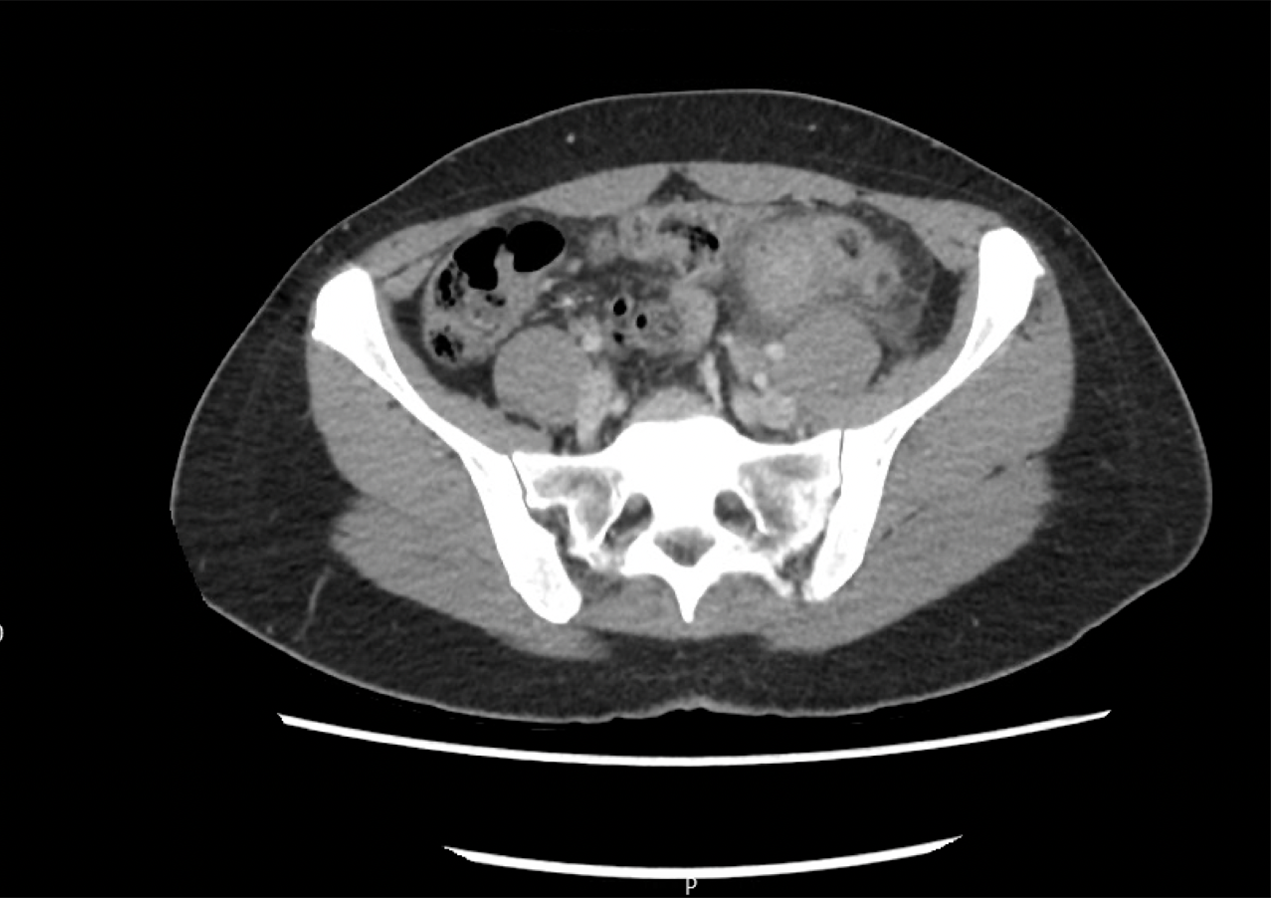 This patient received a CT that confirmed acute flare of diverticulitis with contained perforation involving a short segment in the distal descending colon and proximal sigmoid, with no drainable abscess at this time. She was admitted to medicine with GI and surgery consults following.

This post was written by Cameron Olandt and Colleen Campbell MD RDMS.

A 35 year old male with a history of IV drug use and HIV on ART presents to the emergency department with pain and redness of his left upper extremity for a few days. He denies systemic symptoms or prior history of abscess.

Physical Exam: Notable for a large, well circumscribed area of induration, erythema, warmth, and  tenderness on the left upper arm. Distal to the lesion, there is intact cap refill and 2+ radial pulse.

A bedside ultrasound was performed. What do you see? 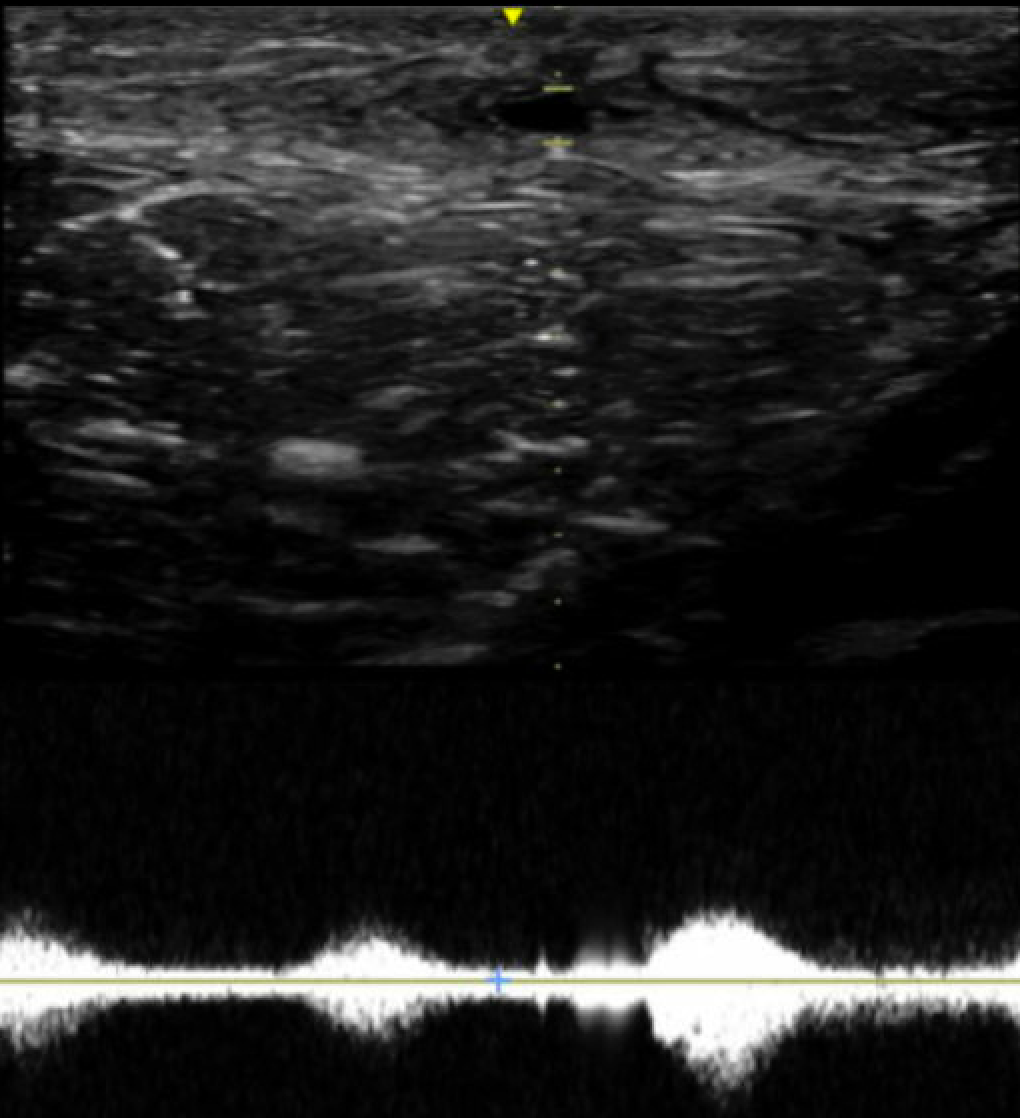 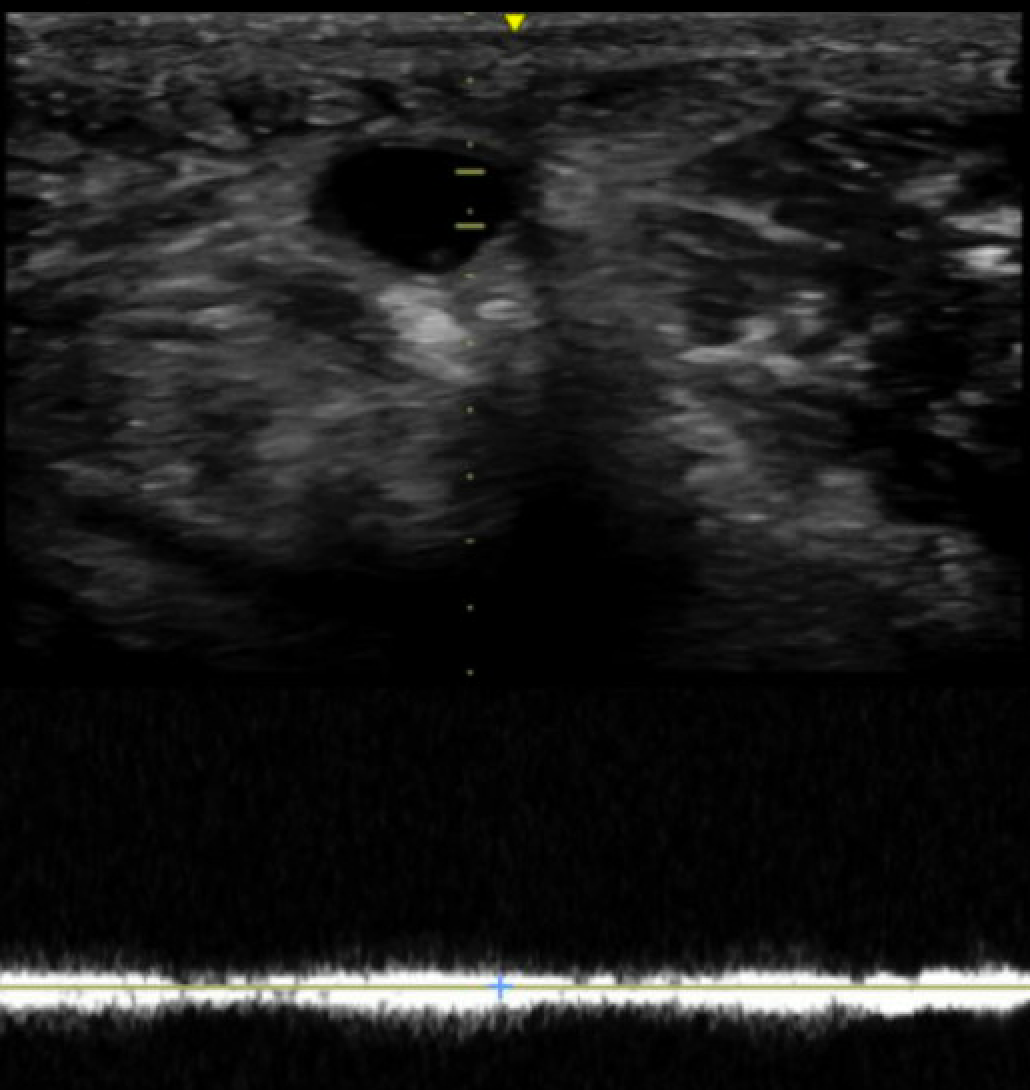 Image 1 is a transverse view of the LUE and demonstrates cobblestoning in the subcutaneous tissue which is suggestive of cellulitis. There is no fluid tracking on the fascial planes, fascial thickening, hyperechoic gas or dirty shadowing to suggest necrotizing fasciitis.

Image 1 also demonstrates a well-circumscribed, anechoic fluid collection concerning for an abscess. However, the lumen-like and well-demarcated appearance deep to the area of cobblestoning also suggests a blood vessel, and so we imaged it with color and pulse-wave doppler.

Image 3 and 4 use pulse wave doppler and demonstrate areas of both pulsatile and continuous flow in various parts of this structure.

Image 5 demonstrates continuity between a distal pulsatile vessel and the proximal fluid collection. The fluid collection likely represents an arterial aneurysm or arteriovenous fistula, as opposed to an abscess. Taking into consideration the patients history of IV drug use, trauma from repeated injections may have created abnormal structures within the patient’s vasculature.

1. When there is concern for cellulitis, POCUS is a useful tool to quickly evaluate for drainable fluid collections, as well as to evaluate for necrotizing fasciitis.

2. When evaluating a possible abscess, it is important to confirm that the collection has no pusatility or flow before attempting drainage.

This post was written by Jeff Hendel, MS4 and Ben Liotta, MD, with further editing by Sukh Singh, MD.