Vaginal bleeding and abdominal pain are common presenting symptoms to the emergency department (ED) in women in early pregnancy. While the majority of pregnant patients presenting with these symptoms are stable, a small subset of this group represents a ruptured ectopic pregnancy with a potential to rapidly decompensate, resulting in high rates of morbidity and mortality. Therefore it is critical for this diagnosis to be identified both accurately and rapidly.

The Focused Assessment of Sonography in Trauma (FAST) exam has been well studied in the acute trauma setting to identify internal bleeding however there is not much data on its use in the non trauma setting. In theory, it makes intuitive sense that it should perform similarly and be able to accurately identify significant non traumatic pelvic and intraperitoneal bleeding.

In a previous study, emergency physician (EP) performed bedside ultrasound (US) in suspected ectopic pregnancy was found to  decrease the time to both diagnosis and treatment [1]. The following study seeks to prospectively investigate the significance of positive fluid in Morison's pouch during transabdominal US examination performed by EPs in patients with suspected ectopic pregnancy.

Is EP performed US with identification of free fluid in Morison's pouch predictive of the need for operative intervention in suspected ectopic pregnancy? 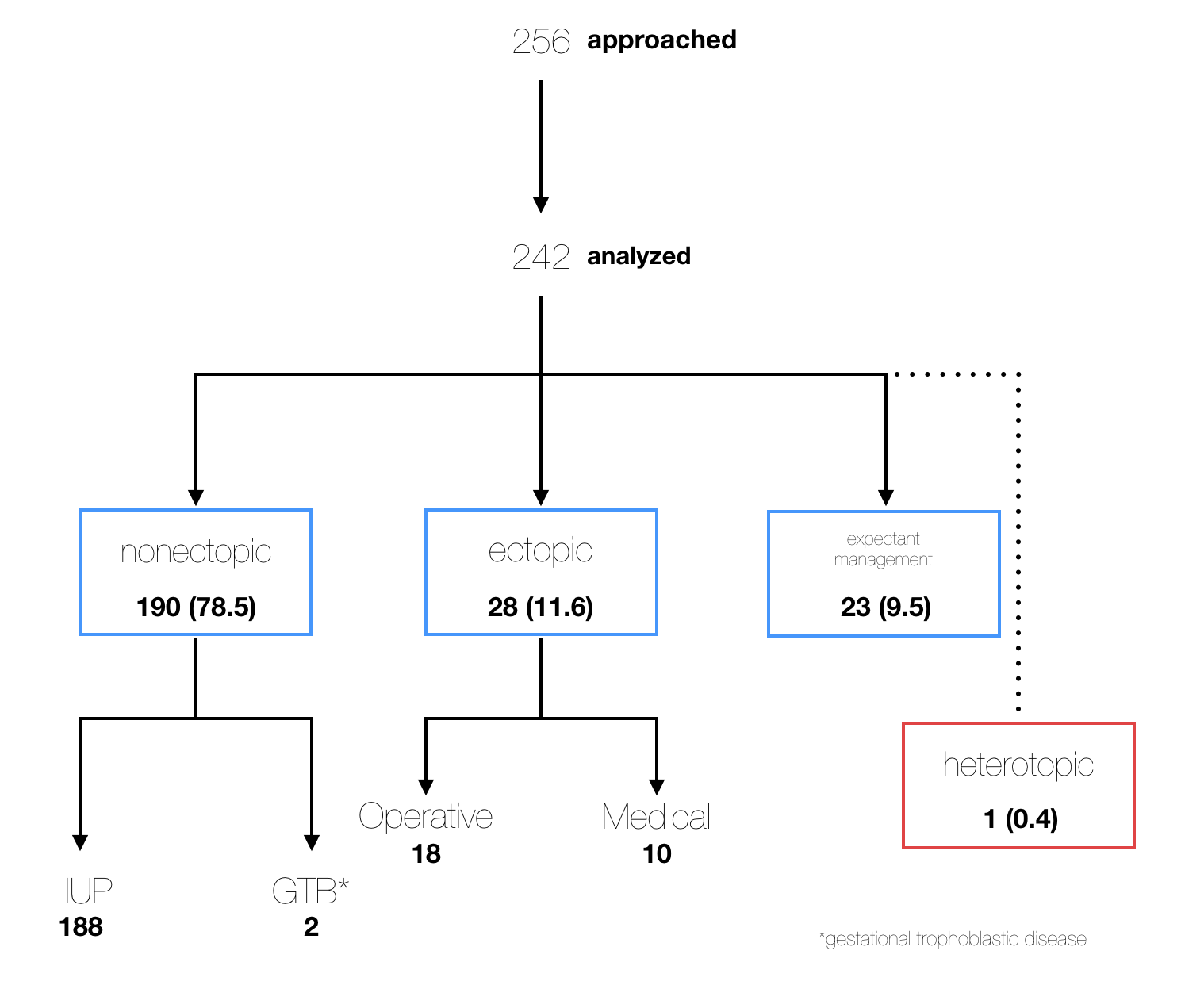 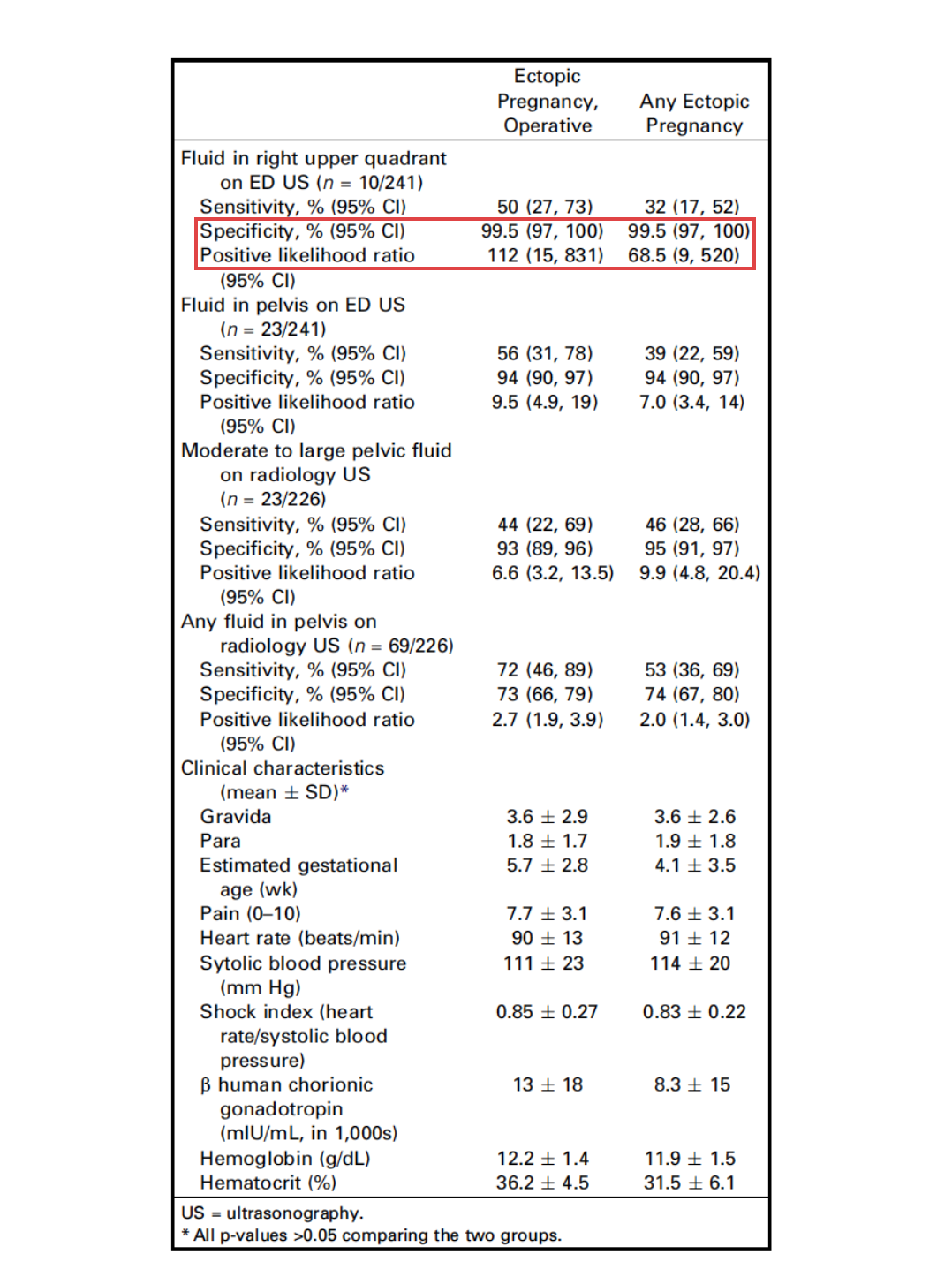 While this paper does not have the methodological prowess of a multicenter randomized control trial, it accurately answers an important question with respect to positive fluid in Morison's pouch on ED US and the need for operative intervention in ectopic pregnancy. This study also highlights the niche of point-of-care ultrasound and why it is so critical to our practice as emergency medicine providers. Unlike radiological studies, which require increased time and may be difficult to obtain in critical patients, point-of-care ultrasound allows rapid identification of key findings that allow for early diagnosis and decision making.

Based on this study, the addition of positive fluid seen in Morison's pouch during ED US for suspected ectopic pregnancy now adds on a strong predictor for the need for operative intervention. This is especially important in unstable and hypotensive patients.

However, there are several caveats to understand when interpreting this data. First, all the patients in this study were enrolled after having a positive pregnancy test, therefore, prior to assuming that a young female with free fluid in her abdomen is from a ruptured ectopic pregnancy, a pregnancy must first be confirmed.  Second, not all free fluid in Morison's pouch in a pregnant woman is due to an ectopic pregnancy. In this data set, there was one patient that had a definitive IUP and free fluid in Morison's pouch which was found to be from a ruptured corpus luteal cyst. There are also case reports of splenic artery aneurysm rupture in pregnancy that could mimic a ruptured ectopic [2]. If an IUP is identified on transabdominal ultrasound, unless the patient is receiving advanced reproductive techniques, alternative explanations for the free fluid should at least be considered before a heterotopic pregnancy is presumed. Third, while this study demonstrates excellent specificity of positive fluid in Morison's pouch and the need for operative intervention in suspected ectopic pregnancy, it has very poor sensitivity. Therefore, ED US should be used as a rule in technique and does not replace formal ultrasound and obstetrical consultation if the diagnosis is not clear.

Free fluid found in Morison’s pouch in patients with suspected ectopic pregnancy can be rapidly identified at the bedside by emergency providers and predicts the need for operative intervention.

A 30 year old male presents to the emergency department after blunt trauma to the face from an altercation. He notes he was punched several times in the face but did not pass out. His exam is notable for significant right periorbital ecchymosis and edema with inability to open his eye. You are unable to perform a direct eye exam given the significant periorbital swelling.  A CT maxillofacial is performed which shows an isolated right inferior orbital wall fracture.

Prior to ENT consultation, a bedside ultrasound of the orbits is performed.  In spite of being unable to open the eye, what can you tell your consultant regarding your exam?

Using ultrasound as an adjunct to your exam, you are able to tell the consultant that there is a normal appearing, reactive pupil and that the extra-ocular movements of the eye are intact. The consultant is appreciative over the phone and is happy to come in and see the patient whom after evaluation is discharged home with close outpatient follow up.

It is often the case where a patient suffers such significant facial trauma that a complete physical exam of the orbit due to periorbital swelling is not possible. Ultrasound can be a critical tool in these cases to provide useful information to assess for multiple potential pathologies. Previous studies have shown the ability of ocular ultrasound in trauma to detect elevated intracranial pressure (via optic nerve sheath diameter), retinal detachment, vitreous hemorrhage, and retrobulbar hematoma. It can also be used for early detection of muscular entrapment in the case of an orbital wall fracture, as well as performed serially for pupillary response in patients with significant neurological injury at risk for deterioration and potential herniation.